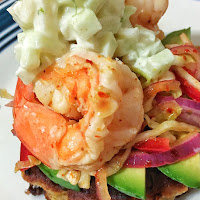 Sometimes leftover can become the most killer aspect to a meal all it takes is a little transformation.  I had left over Mexican corn from a BBQ and I knew I needed a way to make a very light meal of grilled shrimp and slaw a little bit more filling.  Corn cakes were an easy way to make add some yummy carbs to a low carb dinner!  No time for corn cakes?  Put the shrimp and slaw in some tortillas with some sliced avocado, and Greek yogurt for a fantastic Taco Tuesday!

Ingredients
1 cup corn kernels, I used left over grilled corn off the cob but frozen cooked corn or canned corn would work as well
3/4 cup shredded cheddar cheese
1 jalapeno, seeds removed and finely diced (use as much or as little as you like)
1 tsp. garlic powder
1 tsp. paprika
1 ½ cups flour
1 tsp. baking powder
½ cup milk
2 eggs

Instructions
For the Shrimp: In a Ziploc bag add all of the shrimp ingredients and let marinade a half hour up to six hours in the refrigerator.  If you do not have Tajin (go buy it!!!) you can use the chili powder in place of it to get a similar result, use as much or as little chili powder as you wish.

For the Slaw:  In a mixing bowl add the lime juice and zest, the garlic, salt and pepper, and olive oil and whisk together.  Toss the coleslaw shreds, red onion and optional cilantro in the mixture and set aside.

For the Corn Cakes:  Combine all of the ingredients in a mixing bowl and mix until the batter resembles thick pancake batter.  Heat a non-stick pan and add coconut oil or whatever cooking oil you wish to use, enough to make a shallow layer in the pan.  Scoop the corn cakes in ¼ cups into the pan and flatten them out with the bottom of the spoon, cook until golden brown about 3-5 minutes over medium high heat on each side.  I like to keep them in the oven on a baking rack so that they do not get oily but remain crispy and warm while I cook the shrimp.

For the Shrimp: Heat your grill or grill pan and cook the shrimp until they turn pink and just form a “C” shape.  A rule of thumb with shrimp is that a “C” shape is perfectly cooked, straight shrimp are under cooked and once a shrimp turns into a circle it is overcooked and chewy.  I don’t want to estimate a cooking time for grilled shrimp as even though shrimp are a standard size they still widely vary as do grill temperatures.

To Serve: I made my plates as stacks with the corn cake on the bottom, then added sliced avocado, the slaw and then the shrimp with some Greek Yogurt or sour cream on top.  Truth be told they were harder to eat this way but they sure looked pretty!
Posted by Plates of Wrath at 2:19 PM