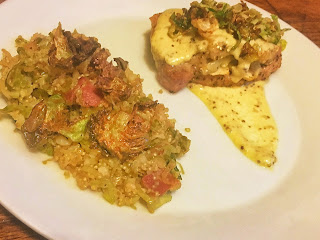 Everyone has those memories of sitting around the kitchen table as a kid and mom serving crispy pork chops with apple sauce, nostalgia, I dig it, but sometimes I want something a little less breaded and fried and a little more refined.  Having gotten some nice thick pork chops on a steal at the market I knew exactly what I wanted to do with them, it helped that I had a lonely apple sitting around and a wheel of brie that needed a purpose besides me eating it by the slice late at night.  I find that stuffing things gives them a ton of flavor and is a excellent vessel for all sorts of ingredients that if placed on top will just fall off.


2 large pork chops, I bought bone out, with a pocket cut into them (you can ask the butcher to do this for you!)


If you didn’t have the butcher cut a pocket in your pork chops, carefully with a sharp knife, cut a pocket into the side of the pork chop but don’t go all the way through.  Season all sides, including the inside with salt and pepper, garlic powder, and Italian seasoning.  Divide the cheese and apples between the two chops and stuff them, if there is extra don’t over stuff them as that will make the filling spill out!


Heat up a skillet (I used cast iron so I only had one pan to clean in the end but whatever you have works) and add the oil, sear both sides of the pork chops.  If you are using an oven safe pan put the entire pan in the oven for approximately 20 minutes or until the internal temperature (Told you that meat thermometer would be really handy) reads 165 degrees, you can take them out at 160 and cover them with foil while you finish the remaining steps.


Serve with the Dijon Cream sauce and I served mine with the previous quinoa recipe.


Add the ingredients to a small sauce pan, bring to a boil and reduce to a simmer until the sauce coats the back of a spoon.  Spoon over the pork chops.
Posted by Plates of Wrath at 12:11 PM