Mexican Corn OFF the Cob 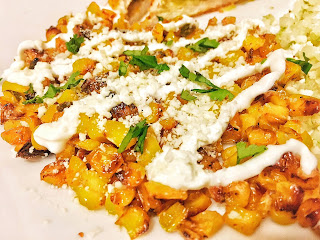 Mexican Corn off the Cob


I really really love Mexican corn, but let’s be honest, Cinco de Mayo is in the month of Mayo and corn on the cob is not cost effective, or in season, so don’t do that.  Buy two bags of frozen corn, trust me on the volume you’re gonna want all that.  Keep in mind this recipe is one of those that you can alter to suit your own tastes or what you have on hand, it’s street food, it’s supposed to be fun!


Defrost corn, spread it out on a baking sheet.  Add jalapenos and olive oil and toss to combine.  Season with salt.  Roast in the oven for 20 minutes, use a spatula to mix the corn around and spread it back out.  Roast until corn begins to brown.  Remove from the oven and sprinkle with Tajin or chili powder and lime juice, stir to coat.  Use as much or as little as you wish.


To serve put the corn in a shallow bowl.  Sprinkle with copious amounts of Cotija cheese.  Put the Greek yogurt, or sour cream or Mexican crema in a small Ziploc bag and snip a corner and drizzle the corn and Cotija with it.  You can cut up some cilantro and sprinkle it on top as well, except for me cilantro tastes like soap (did you know that’s an enzyme thing?!). 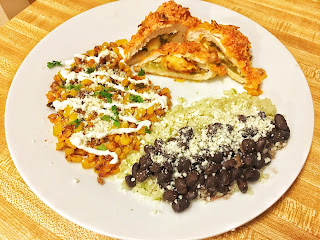 This would also be great for a large gathering as it is something you can put in a large serving bowl with a bunch of little bowls where everyone can dress it up however they want.  Think, little bowl of Cotija, container of Tagin, limes, Chili powder, Crema, Greek Yogurt or even mayo!  If you don’t have Cotija or cannot get it easily, parmesan cheese is a great substitute!   I served this on my Cinco de Mayo menu with Green Chili Dorito Chicken, Cauliflower rice with black beans and a sprinkle of Cotija, when in Mexico City! Ole!
Posted by Plates of Wrath at 9:36 PM