Filet of Fish (Take that McDonalds!) 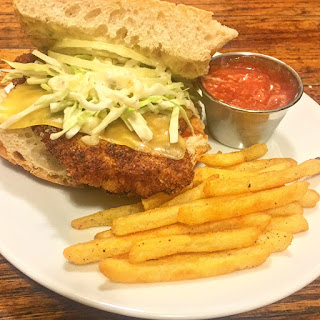 Just over a year ago I took my life back, as much as I love food, food, was ultimately going to kill me one day.  I decided to undergo a major surgery to change my life, the gastric sleeve, and coupled by changing how I eat, by working out (a lot), and by generally leading a much more active life style I have lost 130 pounds thus far and gained a lot of perspective and my love for food has evolved into something that allows me to share my recipes with you.  In making these changes one of the many things I decided was that I would no longer eat “fast food,” goodbye McDonalds, see ya later Wendys, I no longer want or need you.  But, every so often, Timehop reminds you that you used to LOVE a filet of fish on a breezy Lenten Friday, but being that you refuse to eat McDonalds you need to figure out a way to have all the deliciousness of a Filet of Fish without all of the scary things that go into McDonalds.


1 lb. cod filet (Most wild caught fish is flash frozen at sea by law, save the money and get the “previously frozen” fish)


Shred the cabbage, and thinly slice the onion.  Pre-slice rolls and have the cheese ready.


Cut the fish into 4 portions, pat dry with paper towels and set aside.


Combine the bread crumbs in a shallow bowl. Scramble the egg and add a splash of water.  Set this aside.


In a large frying pan add cooking oil, I used canola oil for this, and begin heating.


Egg wash the fish and bread them with the bread crumbs on all sides.  Carefully place the fish in the oil and cook for 4-5 minutes per side or until golden brown.  Let rest on paper towels and place the sliced cheese on the fish when it is hot (the cheese is optional but that’s how I liked my filet of fish).


Spread tarter sauce on one side of the bun, add the sliced onions, shredded cabbage and place the fish in the bun.


I like to add tarter, and ketchup to my sandwich and I served this with quick cooking frozen French fries!  This was a quick late night meal that totally hit the spot and for the cost of the cod, 4.99 a pound, plus the bag of French fries 2.50, deli cheese .53 cents, plus the cost of the rolls 2.00 you can serve 4 people dinner for about 2.50 a person!  Take that McDonalds!
Posted by Plates of Wrath at 8:03 PM