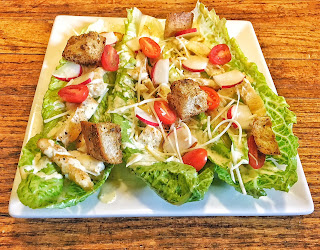 I joke that this is the Ides of March salad because it is a common misconception that Caesar salads are because of Julius Caesar, but they aren't! Caesar Cardini is said to have been an Italian immigrant that lived in California but operated a restaurant in Tijuana, Mexico to avoid the rules of prohibition.  One night when the restaurant was said to be depleted on kitchen supplies Caesar made the salad with what was on hand, garlic, egg yolks, anchovies (seriously, any Caesar at a restaurant has them so relaxxxxxxx they are just what gives it a salty flavor), and romaine lettuce but by making it table side with some flare it became popular with the patrons! This story can't be confirmed but it certainly goes after my heart because so many of my recipes are what I had on hand and what turned into a favorite!


Salt and pepper to taste 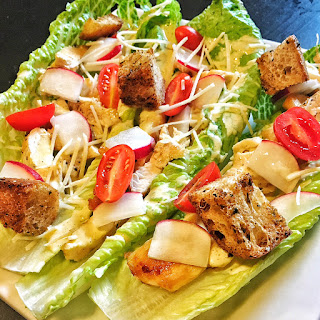 Add all ingredients to your blender, I used my Nutribullet, and blend until smooth, about 30 seconds.  Taste your dressing, if you want it creamier add another egg yolk, if you want it more like a vinaigrette omit the egg.


Simply spoon over fresh romaine lettuce and top with some fresh shredded Parmesan cheese and croutons, I like making mine a meal and adding some grilled chicken and tomatoes.

I like to leave my romaine leaves whole and chop my chicken up so that I can eat my "salad" like a "taco," kitchen existentialism is my favorite!